Politics aside, as I’m not going to state a preference, just what their bodies were saying….

It may have looked like all smiles, but nothing could be further from the truth. These two were locked in handshake combat and they gave whole new meaning to “You had me at Hello.”

There was a subtle tug-of-war going on.  Each one pulling the others’ hand forward. Each one refusing to give up.  It’s a tactic used to display power – “If I can pull you into my space, you have to move forward – as in, come to me”.

Both men were guilty of this trick during the opening handshake and the finishing touch was the elbow / arm grab. Often the touch of the elbow, or shoulder is a sign of affection. There is no love lost here. These two were locked in a hand-to-hand duel using the other arm as leverage.

Oh, we could spend hours pouring through the messages those two were sending with their body language up there on stage….

Here are a few highlights from the Obama / Romney Debate #1.

*I’ve added the red lines in some of the screenshots to show the significance of each movement.

What ROMNEY’s Body Language Was Saying 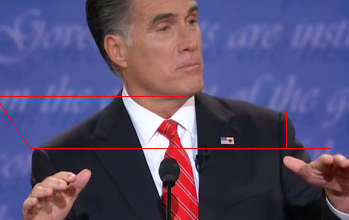 Biggest Error Romney: Leaning back and away when he turns to speak to Obama. About 95% of the time when Romney turned towards Obama there was a significant lean back and away.

What’s Romney’s body is saying?   By creating distance, he’s distancing himself.  Combine the lean away and back with the forced smile and the message is “…just biting my tongue….” Seriously… You can choose to back away from the message, without backing away from the messenger.

Mr. Romney, you were over choreographed, except for those nonverbal signals that cannot be  planned– your facial expressions during your listening gave away your real feelings. First and foremost BREATHE! Take full, complete breaths, which will bring ease and confidence back to your face and fluidity back to your movement. No more Mr. Roboto.

What OBAMA’s Body Language Was Saying

Biggest Error Obama: A consistent head tilt.  There were a few rare moments when discussing certain topics, such as, education, when his head popped into the “power” position.  Sir, have your chin parallel to the ground if you want a command presence.

What’s Obama’s body is saying?  Uncertainty, feeling off-balance. Combine that with the verbal faux-pas’, of starting multiple sentences with an extended “Aaannnddd” then connecting into run-on sentences with “Aaannnddd” AND you have a recipe for others placing a snap judgment of “uncertainty!” slapped down upon you. 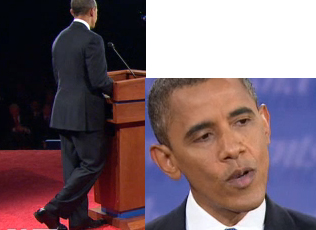 Combine the head tilt with many moments of rocking on his toe and it increased the perception of uncertainty – toe rocking is a comforting movement, it’s a way of self soothing. Geo. W. use to do this a lot behind the lectern too.

I don’t read minds. I read body language, so I’m not going to speculate on the “why” of the head tilt / toe rock, except to say this combination unconsciously signals to others that this person would be easy to ‘knock-off-balance.’

Mr. President, this is NOT a power posture, maybe your shoes were too tight…. Put both feet on the ground and make sure your head is straight in-line with your neck, shoulders and spine.  Please KEEP that chin parallel to the ground. You will look more confident.

I’ve put the tilt side-by-side, observe how they are both tilting – but saying very different things….

Now, for the grand finale ~ my favorite screenshots of the event.
Both are holding their breath while holding back what they REALLY want to say….

In closing, there is no love lost here…. Can you say dislike, disrespect, do I dare say, disdain….