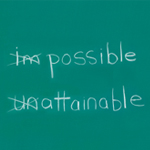 Over the New Year’s weekend, I had the opportunity to spend time with several young adults. I don’t live with regrets, yet if I would have known just a tad of what I know now, what a difference it would have made. Maybe you say the same thing, looking back over failures and successes.

I love sharing with those just starting out in the business world…. Around the dinner table was shared how just slight tweaks to our word choices can make all the difference. Consider the phrase “I want to talk to you…,” versus “I want to talk with you….” Okay, some might argue both sound the same.

Ah, but they are not the same!

The first statement “talk to you” implies power while the second phrase “talk with you” is about influence. With that little nuance in mind I’d like to share with you my friend Kay White’s thoughts on New Year’s resolutions. As a communication expert and mentor as well, we both love the power of words. So, here’s Kay.

How tweaking 2 letters changes everything.

By Kay White, author of The A to Z of Being Understood.

“Mind your Language” is a great piece of advice, truly mind it.  Think about it.  Think about the effect it has on you and then on those around you as you use it.  It’s one of my passions for my clients that they really “get” how important the words and phrases are they choose and then use.   If you have a sense though that you could be more influential, more engaging and inspiring to other people, then changing and updating your ‘script’ transforms the way you connect with people.

A few years ago, I read an article by John La Valle http://www.purenlp.com/ and John is, I believe, a true word-nerd.  A real wizard with the use of language and the difference it makes.  He wrote an article about changing our New Year’s Resolutions and swapping them for New Year’s Evolutions.

Every year when someone asks me “so Kay, are you making any New Year’s Resolutions?” I take John’s advice and tell them “yes, but I make New Year’s Evolutions”.

Think about the word Resolution – looking in my trusty dictionary, it means “a firm decision to do or not to do something.  The action of solving a problem, dispute or contentious matter.”

When you pull it apart, re-solution becomes a solution, redone.  You know when you say it there’s a bit of resistance there.  Something you should be doing as opposed to something you want to do.  Something you’ve tried to do before and are trying to do again.

It’s so common to make a resolution to eat less, exercise more, spend less, save more, work less, be with family more – or sometimes the opposite!  You get the idea, though.

Now, think about the word Evolution – When you think of planning and committing to New Year’s Evolutions, there’s a different feel, a different energy about them with that word.  Again, from my trusty dictionary “Evolution – the gradual development of something.  Current senses stem from a notion of “opening out” and “unfolding” giving a rise to a general sense of development”.

Now with the word Evolution (remember, we only tweaked 2 letters) there’s a more forward motion to it, more of a sense of “Ok, for where I am now and for how I’ve developed now and what I want in my life now, this is what I want for 2012”.

Try putting down 5 New Year’s Evolutions for yourself and before you do, take a moment with these 5 steps to think about how you are “opening out”, “unfolding” and “developing”.

So, with two letters tweaked your Resolutions have become your 2012 Evolutions.

Interestingly, popping an R in front of them will change them even more dramatically- but that’s a whole other story, isn’t it?

One comments on “Tweaking 2 letters changes everything”